A growing number of places recognize that being welcoming leads to prosperity. Welcoming Greater Charlottesville is part of the Welcoming America network, which provides a roadmap to become more inclusive toward immigrants and all residents.

In the 21st century, the strongest communities will be ones where all people can take part in economic, civic, and social life. These places show it is possible to go beyond fear and build a bright future for all.

“The All Hands On Deck project was the result of a chance meeting of Damon Davis and Michael Skolnik, Editor-In-Chief of GlobalGrind. Recently in St. Louis, Davis and Skolnik met during at a session with St. Louis activist and national activists, like Harry Belafonte and others. The two started conversing and brainstorming about ideas, and from that came this project.”

“I tell stories that speak to the human experience. The hands you see are images I have captured of people who have shaped and upheld this movement. The peoples movement. It is our right — to be seen, to be heard…to be validated. It is our collective responsibility. The “All Hands On Deck” project is an ode to that diverse collective dedicated to protecting our human rights, no matter race, age or gender. ‘All Hands On Deck’ is our charge – a call of action to stand with those who stand for us all.”

Built in the shadow of a massive landfill, the Paraguayan community of Cateura survives by selling recyclable materials collected from the trash. A musical group known as the Recycled Orchestra of Cateura plays instruments made entirely out of garbage. When their story goes viral in the media, the orchestra is launched into the global spotlight. Guided by idealistic music director Favio Chavez, the orchestra navigates an unfamiliar new world of arenas and sold­out concerts. After a natural disaster strikes their country, Favio must find a way to keep the orchestra intact and deliver hope to their town. Directors Graham Townsley and Brad Allgood shed light on the possibilities that exist for all communities, no matter how impoverished.

These two documentaries by local filmmakers explore race and inequality on both the local and global level. Anywhere But Here, by director Lorenzo Dickerson, focuses on the flaws in the American justice system and the importance of overcoming negative life experiences. The film features interviews from 13 African-American men incarcerated at the Albemarle-Charlottesville Regional Jail. Seeking Asylum documents director Darnell Lamont Walker’s experience leaving the U.S. in search of a safe space, traveling through other countries in the wake of injustice and tyranny against African-American citizens.

With the Syrian conflict now in its sixth year, millions of people have been displaced from their homes, and still more are forced to migrate each day. After Spring follows two refugee families in transition and several aid workers fighting to keep Zaatari, the largest camp for Syrian refugees, running. Documenting the conflict and refugee crisis, both with no end in sight, the film highlights a dilemma for everyone involved: can they rebuild their lives in a place that was never meant to be permanent?

Larry Levis, one of the most influential and decorated poets of his time, suffered a fatal heart attack at the young age of 49. With an original score by Iron and Wine, this innovative documentary explores his brilliant writing and sometimes troubled life. A series of conversations between friends, family, and contemporaries reveals this Richmond-based poet’s childhood working alongside Mexican-American field hands in California, his three marriages, and his friendships with America’s greatest poets. A Late Style of Fire weaves together a beautiful retelling of a life embodying the risks and triumphs that come with devoting one’s self to art.

This performance event, conceived by Talking Heads lead singer David Byrne, honors the artistry and athleticism of color guard. Ten of the country’s elite color guard teams—the flag-flipping, sequin-studded crème de la crème of the “sport of the arts”—sync steps with musical luminaries for a bacchanalia of beats, sabre spinning, and glitter cannons. Live musicians, including St. Vincent, How to Dress Well, and Nelly Furtado, accompany the teams’ performances with original compositions. This event celebrates the skill and creativity of color guard with elaborate costuming, incredible venues, and stirring music that let this underappreciated art form shine.

Iconic German director Werner Herzog and volcanologist Clive Oppenheimer travel to the world’s most treacherous volcanoes to ponder the meaning of these bizarre vents in the Earth’s crust. On this journey, they travel to Iceland, North Korea, Indonesia, and Ethiopia to explore the potential threat, distinctive identities, and seductive allure of each volcano. Paying tribute to the late French researchers Katia and Maurice Krafft, Herzog incorporates their stunning up-close footage of magma rivers. Herzog artfully blends reportage, history, and philosophy into a captivating cinematic experience that conjures a magical assessment of a natural phenomenon.

FAB is excited to bring to you The Sustainable Artist Toolkit – a series of workshops led by A. Nia Edwards-Austin, Eva Yaa Asantewaa, Kendra Ross, and Sydnie Mosley, for artists, cultural workers, creativity seekers… and everyone in between. Learn to tell your stories, share resources, activate the community, cultivate thoughtful responsiveness — all while working towards a generative and caring ecosystem.

For THE SHIPMENT, Young Jean Lee gave herself the most uncomfortable challenge she could imagine: to make—as a Korean-American—a show about black identity. The show was made in collaboration with an all-black cast and is divided into two parts. The first half is structured like a minstrel show—dance, stand-up routine, sketches, and a song—and was written to address the stereotypes the cast members felt they had to deal with as black performers. For the second half of the show, Lee asked the actors to come up with roles they’d always wanted to play, and wrote a naturalistic comedy in response to their requests. Read More >

I visited 25 neighborhoods, talking with hundreds of people, and asked them what the most meaningful places in their neighborhood were: if they could make unofficial postcards of just their neighborhood, what would they choose? I took photographs of each of these places, chose 100 final images, made 10 vintage postcards of each, and unleashed 1000 postcards into the city, pre-postmarked, pre-addressed to me, and with a simple prompt: “When I look at this postcard, I think about…”. Providence Postcard Project

Conceived at the height of the European economic crisis, A (Micro) History of World Economics, Danced explores our collective economic history over centuries of time. Integrating stories of a diverse range of Angelenos with 300 years of global economic history, this work explores the community impact of the financial crisis.

“How do people transform their worlds through creativity and the arts? What difference can art make for those who live in situations of risk, violence and crisis? Who are the artists on the peripheries of our societies and how are they working to bring about change?

People’s Palace Projects seeks to ask these questions through participatory arts projects, performances, educational initiatives and debates. We bring artists, activists, academics and audiences together for projects that address a wide range of social justice and human rights issues.”

Continuing the Conversation: How Will Art Solve Problems?

“Understanding the role art plays in solving problems prompts us to consider the parameters we use to define problems, the metrics we use to assess whether a problem is solved, and the elasticity of the boundaries around what we consider “art.” The word “will” places us in the context of futurity and possibility. Given the litany of problems at global, national, and local levels, many of us long for a future that is remarkably better than the past and the present space we experience quite viscerally. We may be suspended in a state of contemplation about the future tense, or a not-yet-happened state. Indeed, this future is tense.”

“This year, as we celebrate 40 years of dancemaking, we are also celebrating one of our greatest capacities as an organization— the ways that we advance an ever-growing body of creative practices in partnership with artists and partners across diverse communities and disciplines. Through this work we support and build together our capacities as individuals, communities, and organizations to ignite inquiry and inspire action. Over these four decades, this work has lived in our institutes, residencies and in every community engagement. We are now advancing these efforts by developing and articulating new ways for creating artistic work that enhances local value and impact beyond Dance Exchange’s involvement.” 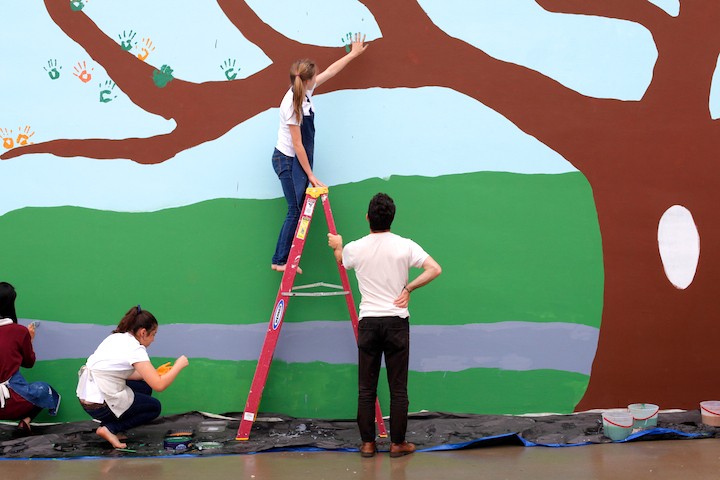 “The Charlottesville Mural Project showcases the talents of artists and designers while creating a more interesting visual landscape in the city. With the goal of producing at least two murals per year–one with an established artist, and one as an outreach project–we bring public art to the streets and communities of Charlottesville and beyond.” Founded in 1997, New Urban Arts is a nationally-recognized community arts studio for high school students and emerging artists in Providence, Rhode Island. Our mission is to build a vital community that empowers young people as artists and leaders to develop a creative practice they can sustain throughout their lives. The Creative Time Summit-the world’s largest international conference on art and social change-is headed to Washington, D.C.! Creative Time Summit DC: Occupy the Future will be held at D.C.’s historic Lincoln Theatre on October 14 – 16, 2016. We are planning a field trip (tentatively on the 14th — mark your calendars!)

Dialogue will involve several presentations about particular groups and broader thematic conversations about ethics and social engagement in the arts.

Art in the Public Interest (API) is a nonprofit organization that supports the belief that the arts are an integral part of a healthy culture, and provide significant value both to communities and artists.

Between the Door and the Street: A Performance Initiated by Suzanne Lacy from Creative Time on Vimeo.

The Design Studio for Social Intervention is dedicated to changing how social justice is imagined, developed and deployed here in the United States. In practice, we function as a creativity lab for social justice work in the public sphere. The Studio is a space where activists, artists, academics and the larger public come together to imagine new approaches to social change and new angles to address complex social issues. We also design social interventions that engage populations in imagining and designing new solutions to social problems.